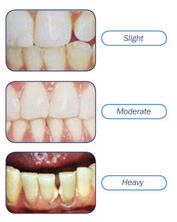 Plaque is a sticky, colorless deposit of bacteria that is constantly forming on the tooth surface. Saliva, food, and fluids combine to produce these deposits that collect on teeth and where teeth and gums meet.

The buildup of plaque can trap stains on the teeth, and it is also the primary factor in gum disease. Fighting plaque is a life-long part of good oral care.

Plaque begins forming on teeth 4 to 12 hours after brushing, which is why it is so important to brush at least twice a day and floss daily.

Tartar, also called calculus, is a crusty deposit that can trap stains on the teeth and cause discoloration. It creates a strong bond that can only be removed by a dental professional. Tartar formation may also make it more difficult to remove new plaque and bacteria.

Individuals vary greatly in their susceptibility to plaque and tartar. For many of us, these deposits build up faster as we age.

The photographs show the degrees of tartar (or calculus) formation.

There are many stages and forms of periodontal disease, including: 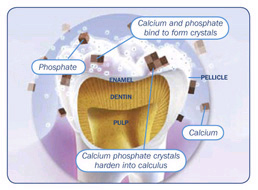 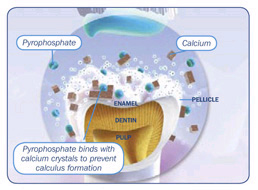 Calcium and phosphate bind to form crystals on the teeth. These calcium phosphate crystals eventually harden within plaque, forming calculus. Certain types of chemicals called pyrophosphates help to decrease calculus buildup by stopping the growth of crystals on the tooth surface and preventing new crystals from forming.

YOU CAN HELP PREVENT THE BUILDUP OF TARTAR BY: